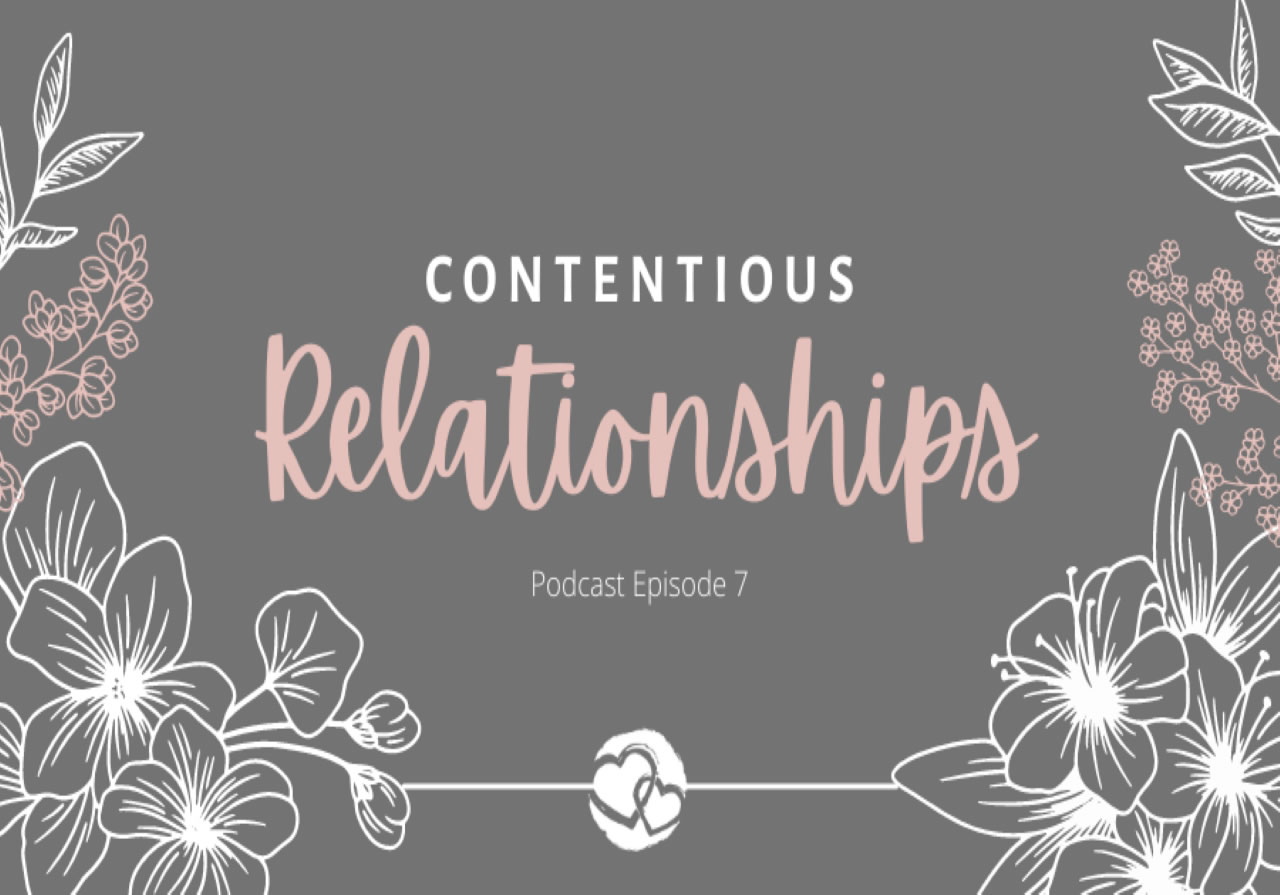 < Back to Podcast index

I was in an airport waiting for a flight that had been delayed. There was a couple nearby, and they were having a private argument in public. You know, the ones where what they’re saying is private, but the volume of their voices makes it public. The woman seemed oblivious to the people around her when she said these words: “Why don’t you man up?” It was an awkward scene and most of us were trying not to look but it was hard not to hear. The man mumbled something under his breath, and they continued using words like weapons until we boarded. This couple had two children with them, and these children looked painfully uncomfortable.

You know what else I saw? I witnessed a lesson about the damage of being contentious. Something happened before we saw the tense exchange between that couple. They didn’t just start arguing at that moment. Something tripped a switch, and the fight was ON. Are you like that? Are there certain things that just set you off? Maybe you get snappy when people mess up the house. They just don’t see the value of a tidy home and that drives you a special kind of crazy! Or maybe you change into Matilda the Hun when you’re too hungry? Seriously, some people really do seem to go through a personality change when they’re low on fuel. Knowing this about yourself and being prepared is a really good idea. Hello, snacks in the glovebox of the car… Or maybe you have some unresolved conflict with someone, and since it’s not fixed, you’re giving them the silent treatment while chewing on others. This is unjust but common.

Whatever the cause, a contentious person becomes a source of irritation, like the sound of dripping water on a rainy day. The Bible says so in Proverbs 27:15: “A continual dropping in a very rainy day and a contentious woman are alike.” Note that this verse specifically mentions a woman, but we all know that anyone can be contentious. Let’s read the verse for the all-inclusive contentious person found in Proverbs 26:21: “As coals are to burning coals, and wood to fire; so is a contentious man to kindle strife.” Some people are professional brawlers. Not a life goal. What can we do about this human tendency to be contentious? The Bible has a lot to say about this subject, but we’ll just examine a few verses, and you can continue this study on your own.

You are not number one.

“He that is first in his own cause seemeth just; but his neighbour cometh and searcheth him.” (Proverbs 18:17)

Have you ever listened to someone describing a disagreement they’ve had with another person? Rarely will you hear them say, “I was the one who started it,” or “I could have handled my side better.”
We tend to paint ourselves in the best light while casting shade on others. If we were in a courtroom and our family members were on the witness stand, would they accuse us of being self-centered? If the answer is “yes,” then something needs to change. Ask God to show you where you took a wrong turn and He’ll guide you back on course. Putting ourselves first is culturally acceptable, but biblically backwards. We’ll have less to argue about if we’re not trying to have our own way. It takes a focused effort to abandon the ME-FIRST habit, but in Christ this can be achieved.
Looking at the other side is not our first instinct. Selfishness is natural, but selflessness requires effort and lots of practice. Whether it’s a family member, a co-worker, or someone in the ministry, we will all have opportunities to disagree and will wrestle with the desire to press our case until we are satisfied with the outcome.
The problem with this “I have to make my point” mentality is that we may win the point but damage the relationship in the process. It helps to remember that the person we’re contending with believes that they have valid points as well. When we’ll pause to carefully consider someone else’s point of view, we’re being biblical.
There is a peaceful calm in life when we’re not striving to put ourselves first.

“It is better to dwell in the wilderness, than with a contentious and an angry woman.” (Proverbs 21:19)

We see two things in this verse. First, it’s better not to come home than to come home to someone who’s just waiting to get into the next argument. Secondly, Proverbs 21:19 pairs these words: “contentious” and “angry.” Contentious people are angry about something and it would be a wise use of time to sit still with God and figure out what has you so angry.
Unresolved conflicts don’t go away, they just morph into relentless arguing, ultimately leading to a chilling if not a death of the relationship. When we imagine that we have all the time in the world to get things right with others, we’re assuming something that could prove to be false. Every person has a limited lifetime.
If you are so angry with a person that you don’t care if things are ever made right, then something is wrong between you and the Lord. Repair your relationship with God, and He’ll transform your relationships with others as He gives you an interior makeover. This is what happens when we’re “transformed by the renewing of our minds” as it says in Romans 12:2.

Children may be the source of contention.

“A foolish son is the calamity of his father: and the contentions of a wife are a continual dropping.” Proverbs 19:13

This verse also has two pictures in one: a man who has a foolish son and a contentious wife. One way to look at this verse is to consider these issues as two separate problems, but have you ever considered that the wife may have been arguing with her husband about the foolish child? I’ve often wondered if this wasn’t the source of the wife’s contentions!

My husband and I were having no problem walking in lockstep unity training our children, but when we reached the stage where we had to take off our “Because I said so” hats and replace them with “Trusted Advisor” hats, that’s when the differences began to surface.
I can remember disagreeing strongly with my husband over an issue with one of our children, and he finally said this: “Do what you want to do, but my advice is that we wait and pray and say very little if anything right now.” You know what I heard? I caught the first six words: “Do what you want to do.”

What did I do? I did my own thing and caused a mess that took weeks to clean up. When we press on to make our point or to teach a lesson or to remind someone of scripture that they’ve learned, we may overstep into a spot that does nothing more than create more strife. I learned that day that my contentions were not going to achieve God’s goals for our family.
We will never argue our way to happiness, and the only satisfaction in winning an argument is that you proved you can be contentious to the finish line. Are you in the habit of being contentious? Take some time to pray and ask the Lord to reveal where you have inserted your own ways instead of His ways and commit to turning away from this unhealthy habit.

Contentiousness can really harm our relationships. We don’t want to do that. We never know how much time we have.

Invite your sister friends to our new podcast, and please be sure to leave us a star-rating and a brief review! More podcasts to come on the “issues of life.”

"Keep thy heart with all diligence; for out of it are the issues of life." - Proverbs 4:23

Rosemary is a savory herb with a heavenly scent. Not surprisingly, this herb is also great for relaxation and stress relief. One website even said that it promotes hair growth! This adaptable herb…

Waiting For A Change

“I can’t wait until this is over.”Fill in the blank with your own personal “this.” Maybe it’s job loss, or being employed in a job you dread.

How Many Days Do We Have?

These words were not comforting when my husband was in his final days, but they were spoken by a nurse who had seen many people pass into eternity.

The Beginning is the Key

In our age of instant gratification, instant downloads, instant coffee, and the Instant Pot, everyone is looking for the quickest route to success. How can I put in the least amount of effort and still be successful? I’m right there with you!

Don’t Tell Me What To Do

The scene is familiar. Someone you love is living in a way that is unstable, so you attempt to correct them with instructions that seem logical to you. The conversation…

I overheard my Mom and Dad having an argument when I was about eight or nine years old. My eavesdropping ears couldn’t pick up all the words that my Mom was saying, but Dad’s words were…

What God Has Taught Me About Self-Esteem

When a Sister Needs Encouragement

Discouragement piles up quickly. Some people say our trials even come in threes. I don’t know if there is truth in the statistic…

Cold sweats. Heart palpitations. Throbbing headache. For two weeks in a row, I was awakened from a sound sleep shortly after pillowing my…

The Encouragement Found in “Fear the LORD”

I had an understanding that we should have a healthy fear, or reverential awe, for the LORD, but I wanted to dig a little deeper.

Francie covers a variety of topics affecting Christian women at various stages, all designed to encourage women to "keep the heart." Read More

"Keep thy heart with all diligence; for out of it are the issues of life."